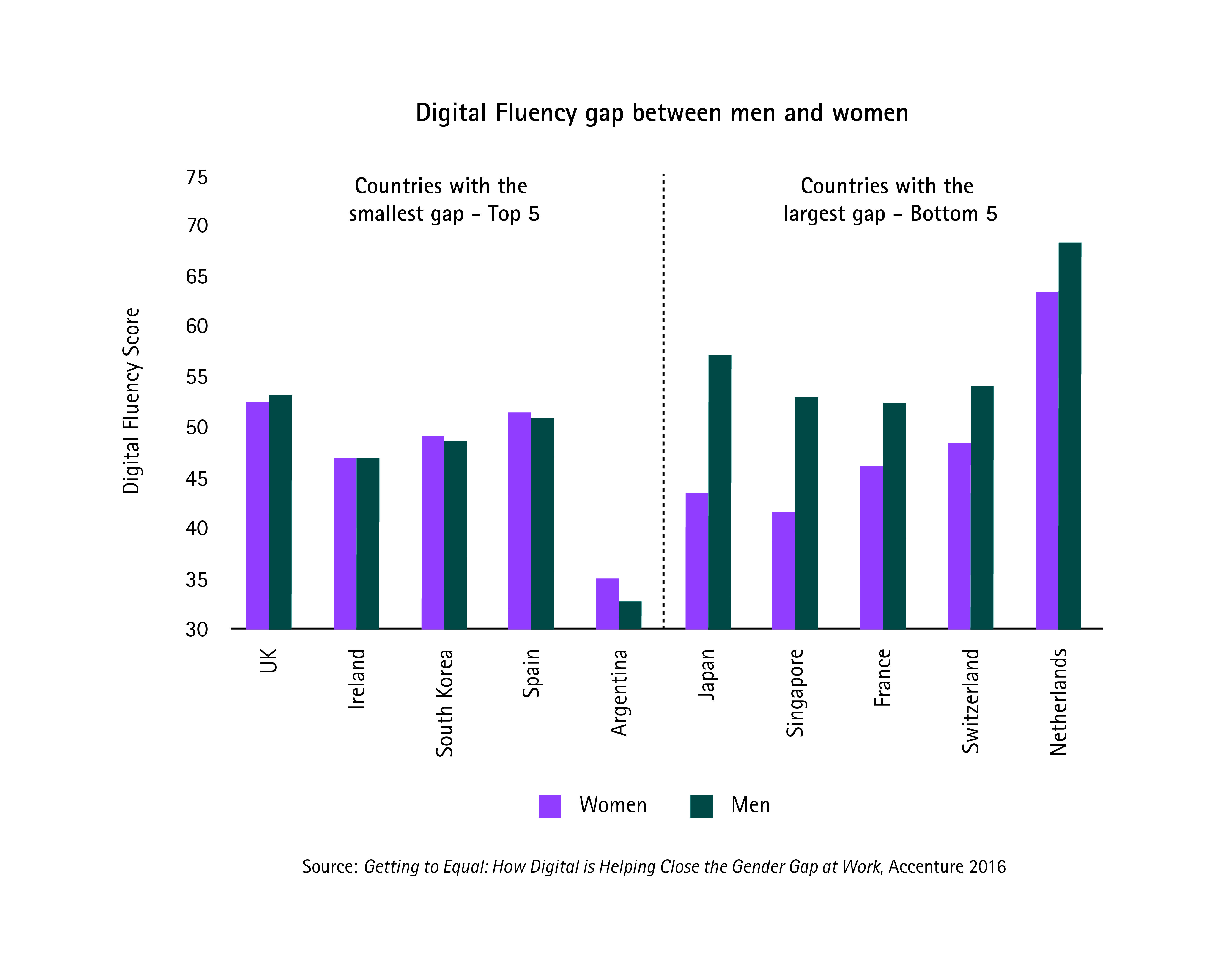 The U.S. could achieve gender pay equality in less than 25 years.

A new study by professional services firm Accenture found that, if we double the rate at which women become digitally fluent, developed countries could see workplace gender parity by 2040—or 25 years sooner than the current World Economic Forum estimates.

The analysis is based on a combination of existing country-level published data and a survey of 5,000 women and men in 31 countries about their use of technology and career advancement. Using variables like online access and the availability of work collaboration tools, Accenture assigned the men and women of each country a “digital fluency score” on a scale from 1 to 100—100 being the most digitally fluent.

The report defines digital fluency as “the extent to which people embrace and use digital technologies to become more knowledgeable, connected and effective.” It’s not about whether people know how to code, but rather whether they go online to do taxes, pay bills, or take online courses, explains Julie Sweet, Accenture’s group chief of North America.

The right way to tackle the diversity gap according to an Apple Executive
Denise Young Smith, VP of human resources for the tech giant, says creating workplace diversity should be considered a good way to get top talent — not a problem that needs fixing.

“This goes to show how much of an impact culture has,” explains Sweet. “Even in countries where online access is readily available, there may not be the same expectation for women.”

The researchers also examined how digital fluency affects the advancement of women in each country across three main categories: education (preparing for work), employment (finding and keeping a job), and advancement (how quickly they rise through the ranks).

“It takes work to figure out how to bank on your phone, how to sign up for classes, how to connect in a community,” says Sweet. “This research is saying to women, ‘Your ability to do that and be comfortable with it matters. It’s not just a nice-to-have. Having those skills matters at the workplace.'”

Being tech savvy has a positive effect on women’s career prospects, and the benefits for women are even more profound than they are for men. One of Sweet’s hypotheses is that the flexibility that these technologies afford women, who traditionally take on caretaker roles, enables them to attain education and land jobs in cases where they otherwise wouldn’t have.

“You’re seeing it have a bigger impact because women are coming from farther behind,” Sweet says. “Digital fluency can accelerate progress.”

And while technology is indeed helping narrow the gender-based pay gap, at the current pace of change it will only close completely for developed nations in 2065. A doubling of this progress would speed up that trajectory to 2040.

“Here’s real proof about the impact that investing in digital has for both men and women,” Sweet says. “The government needs to invest in raising digital fluency of its citizenry.” These investments can include things as simple as allowing people to do taxes or apply for health insurance online (think: healthcare.gov).

“It’s not about teaching everyone to code,” says Sweet. “It’s as simple as making sure schools have access to computers.”