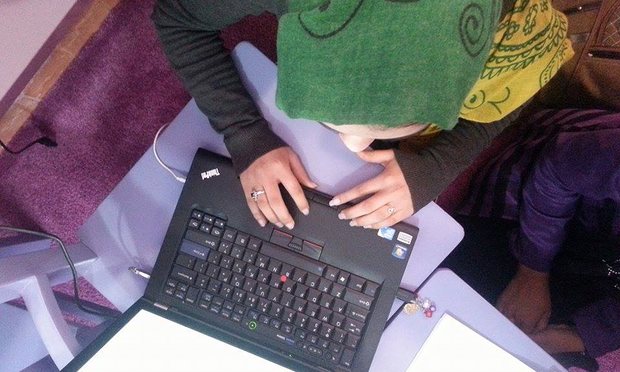 In a country where just 16% of the workforce is female, teaching women to code can help foster greater equality, empowerment and economic stability

In the city of Herat in western Afghanistan, a small but determined contingent of young women are quietly learning to code. They grow more empowered, creative and confident every day, says Fereshteh Forough, who set up after-school programme Code to Inspire – the country’s first coding school for women – in November 2015.

“The beauty of coding and tech is that it doesn’t matter who you are or where you are – with one computer and the internet they can reach the world and work without even leaving the house,” says the 29-year-old, an Iranian-born Afghan refugee who returned to Afghanistan with her family after the Taliban regime fell in 2001.

Code to Inspire would have been unthinkable before then, when under Taliban rule, girls’ education was illegal and the internet was banned. Code to Inspire is looking to the future. So far it has taken on 50 students between the ages of 15 and 25 in Herat and aims to expand into Kabul and Mazar-e-Sharif. Students are learning the language to develop websites, creating their own mobile apps and exploring gaming technology.

In a highly conservative country where up to 85% of women have had no formal education, and only 16% of the workforce are women, in many ways these students are the lucky ones.

“Education for women is still a very sensitive topic, it is a very male-dominated culture,” says Forough. Even in strict families, where young women might still have limitations on their independence, coding offers the chance to work from home, she points out.

When studying computer science at Herat University, Forough encountered lots of problems as one of the only female students. “I was a very vocal student; the majority of my classmates were male and a lot of the time they didn’t like to see a girl being so vocal in the classroom,” she says.

Forough became one of the first female mentors to teach Java. More than 200 students were taking the class – but only 10 turned up for the first few weeks. “They didn’t want to learn from a girl – they didn’t think I’d be capable.”

With her own experiences in mind, the first priority was to find a safe and secure location to hold the coding classes – “we didn’t want to create any unnecessary trouble for the women or their families”. The Code to Inspire team has worked hard to foster good relations with the local community and has won the approval of the students’ fathers and brothers.

Among the students is 20-year-old Heydeh, who aspires to become a professional web developer. “I have big dreams, I want to make websites to support local people with their work so they are no longer forced to turn to other countries for help,” she explains.

“I was excited to come to Code to Inspire because coding is not too familiar [in Afghanistan] and women cannot normally raise their voices – but we are proving women have that power and we can talk with the world via coding.” She says her family were skeptical at first, but now they want to help her realise a future beyond just “housework and marriage”.

One student has already created a delivery app for a local restaurant, while others are working on how they can build platforms to promote their country to potential tourists.

Other organisations are recognising the potency of nurturing female coders in Afghanistan, too. In April 2016 non-profit The Womanity Foundation launched Girls can Code in two of Kabul’s biggest girls’ schools. Forty students between the ages of 16-18 are enrolled in the classes, which take place before and after school.

“Coding empowers girls by teaching them how to use their creativity, imagination and problem-solving skills to develop solutions,” says Elizabeth Rector, programme leader. “Through this process they build confidence and learn to rely on their own abilities to find solutions, and these skills are forever with them.”

There is global shortage of skilled tech workers expected in the coming years, Rector adds. In Afghanistan the population’s access to the internet is currently only 7% and businesses need to prepare for the coming growth in internet access.

“Investing in educating girls in subjects like coding, where we expect there to be abundant, good-paying jobs is key to the future of Afghanistan. With a full range of talent to tap into, Afghanistan’s economy can grow and become less reliant on foreign aid and retain ambitious young women,” says Rector.

Female app developers are already emerging in Kabul and Herat – in May, 45 young women submitted mobile app ideas at Girls Make Apps workshops, organised by Herat Technovation. Universities and other technical schools are working to increase female enrolment and organisations such as USAid are investing in matching young women to ICT employment opportunities, according to Rector.

Travel the world and reach for the stars

For Afghan women aspiring to get into tech, Forough is testament that it can be done. So is her former classmate, Roya Mahboob, who founded IT consulting firm Afghan Citadel Software Co in 2010, making her one of the country’s first female tech chief executives. She also launched Digital Citizen Fund, a nonprofit which helps girls and women in developing countries gain access to technology.

Mahboob says setting up her business wasn’t easy: “It was very hard to establish a client base at first – many men didn’t want to do business with women, even though we could bring them clients,” she says.

When pitching for business, the fact she is the chief executive of her own company is regularly met with outright disbelief, and it hasn’t been uncommon for clients to refuse to pay for work carried out. Mahboob and her team have even been followed, spied on and threatened. Undeterred, she has made it her priority to hire female programmers and bloggers from the beginning. Today more than half of her staff are women – and business is thriving in Afghanistan and beyond its borders.

“While cultural barriers threaten the dreams and aspirations of young women and girls, the opportunities they can find through the internet and technologies show them a larger world than the one that they have always known,” says the entrepreneur. “They can travel the world and reach for the stars, without even having a passport.”

The story in Afghanistan feeds into a wider struggle going on throughout the world to get more women into tech. In an increasingly digital world, it will be at the heart of unlocking greater equality, empowerment and economic stability in every country.